Little Chaudière Rapids have a playspot on the Quebec side of the Ottawa River that is seldom used. It is generally best in the spring when the levels are falling. A storm drain empties out into the abutting eddy and hence the playspot gets its name "Sewer Wave". 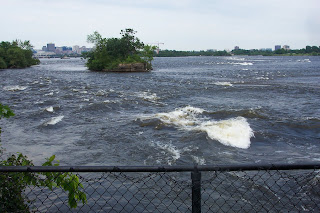 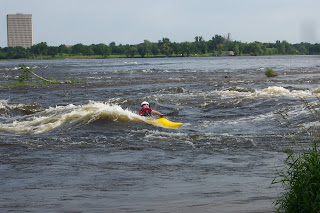 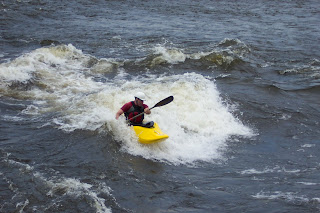 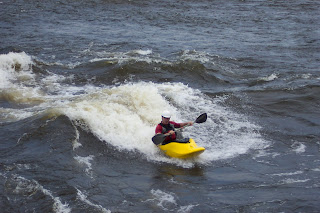 Sewer Wave at 58.6 on the Britannia Gauge.

What it is like: It is a forgiving breaking wave with eddy access on the river left. These waves are great for all types of wave moves like spins, blunts, and backstabs. If the water temperature is right it is a decent spot for beginners to learn. It is very comparable to Pushbutton on the upper Ottawa River but it is wider.
Water Levels: The waves are best between 58.4 and 58.7 on the Britannia Gauge. As levels fall the waves further downstream become shallower and there is the potential of hitting rocks.
Safety: This is a class II-III playspot. It is a close swim to shore, however, make sure that you are wearing the appropriate cold water gear in the spring. Gloves, pogies, warm headgear, a drytop or drysuit, and farmer johns are necessary for a swim here in the spring because the water is cold and hypothermia can set in quickly. Make sure you wear earplugs because rolling in the eddy where the storm drain effluent is released can cause an ear infection.
How to get there: Cross the Champlain Bridge, take Boulevard Lucerne or Alexandre-Tache east until you get to Rue Begin. Make a right here and park at Parc Brebeuf. The Sewer wave is right behind the large statue. Click on the map below to interact and get directions. 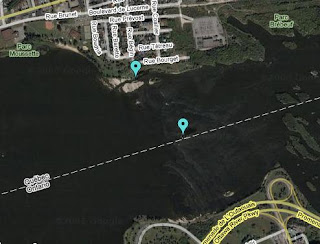 Below is a video shot at a level of 58.6 on the Britannia gauge. My thanks to mmmpaddle's youtube site: http://www.youtube.com/user/mmmpaddle